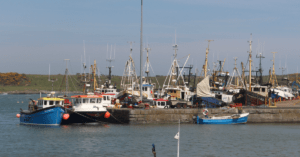 Ardglass is a beautiful, picturesque village situated in County Down.

Ardglass is on the east coast of Northern Ireland. It is an active fishing village to this day.

The village has many historical sites demonstrating it’s importance as a port and centre of commerce in days gone by.

The King’s Castle, which is currently a nursing home, was built in the 12th century. It majestically overlooks the village.

The cannon in the grounds of the castle is a from a French ship which was enroute to Ireland with weapons for the United Irishmen.

The unique bathing house is a superb example of quirky Georgian architecture. Designed for privacy while changing before a swim in the sea.

The Hunter College in New York today was the first free teachers college in the United States of America. The college – known then as The Female Normal and High School – was established by Thomas Hunter who was born in Ardglass in 1831.

Ardglass Golf Club has the dramatic backdrop of the crashing waves of the Irish Sea to take your mind of the golf if it is not going so well. 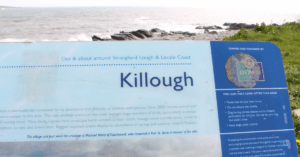 Killough is a quaint, picturesque village in County Down and is well worth a visit.

Killough was once a busy port and village servicing commerce on the East Coast of Northern Ireland.

On our next trip, we will spend some time at St John’s Point and Coney Island.

In the meantime, check out the first instalment in our video series of this beautiful part of County Down, Northern Ireland.