Belfast Mural at The Duke of York 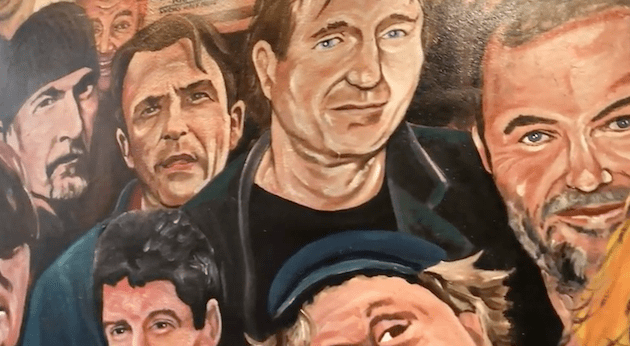 If you take a stroll around Belfast’s Cathedral Quarter and you decide to call in for a drink in the wonderfully, quirky Duke of York, you can’t help but notice a Belfast mural with a difference.

And notice you should!!!

It is an amazing piece of artwork!

The mural is a who’s who of Ireland’s great and good – both North and South and there’s not a political reference in sight!

There is a wall full of musicians, poets, authors, actors, sports people and comedians – a mural that celebrates the creative talent and joy that is part of culture here that everyone can enjoy!

You will have great fun naming who is on the wall.

Most you will recognise and some you might be stuck on – it really is a Northern Ireland game of Guess Who!

Everyone from Van Morrison to Rory Gallagher, Jimmy Young to Gloria Hunniford, Gary Moore to Ronnie Drew features on this Belfast Mural with a difference

The murals are funded completely by the Dark Horse and Duke of York pubs as part of their commitment to local artists.

Check out our video of the mural and make sure to visit it the next time you are in Belfast.

We enjoyed the mural and then a refreshing drink in Duke of York. You should try it too!

The poem from Irish poet WB Yeats – An Irishman Foresees his Death! features on the ceiling of the tunnel where the mural adorns the wall.

It deals with the issue of an Irish Soldier fighting for the British during the First World War.

I know that I shall meet my fate
Somewhere among the clouds above;
Those that I fight I do not hate
Those that I guard I do not love;
My country is Kiltartan Cross,
My countrymen Kiltartan’s poor,
No likely end could bring them loss
Or leave them happier than before.
Nor law, nor duty bade me fight,
Nor public man, nor cheering crowds,
A lonely impulse of delight
Drove to this tumult in the clouds;
I balanced all, brought all to mind,
The years to come seemed waste of breath,
A waste of breath the years behind
In balance with this life, this death.

Can you identify all the faces on the Belfast Mural?