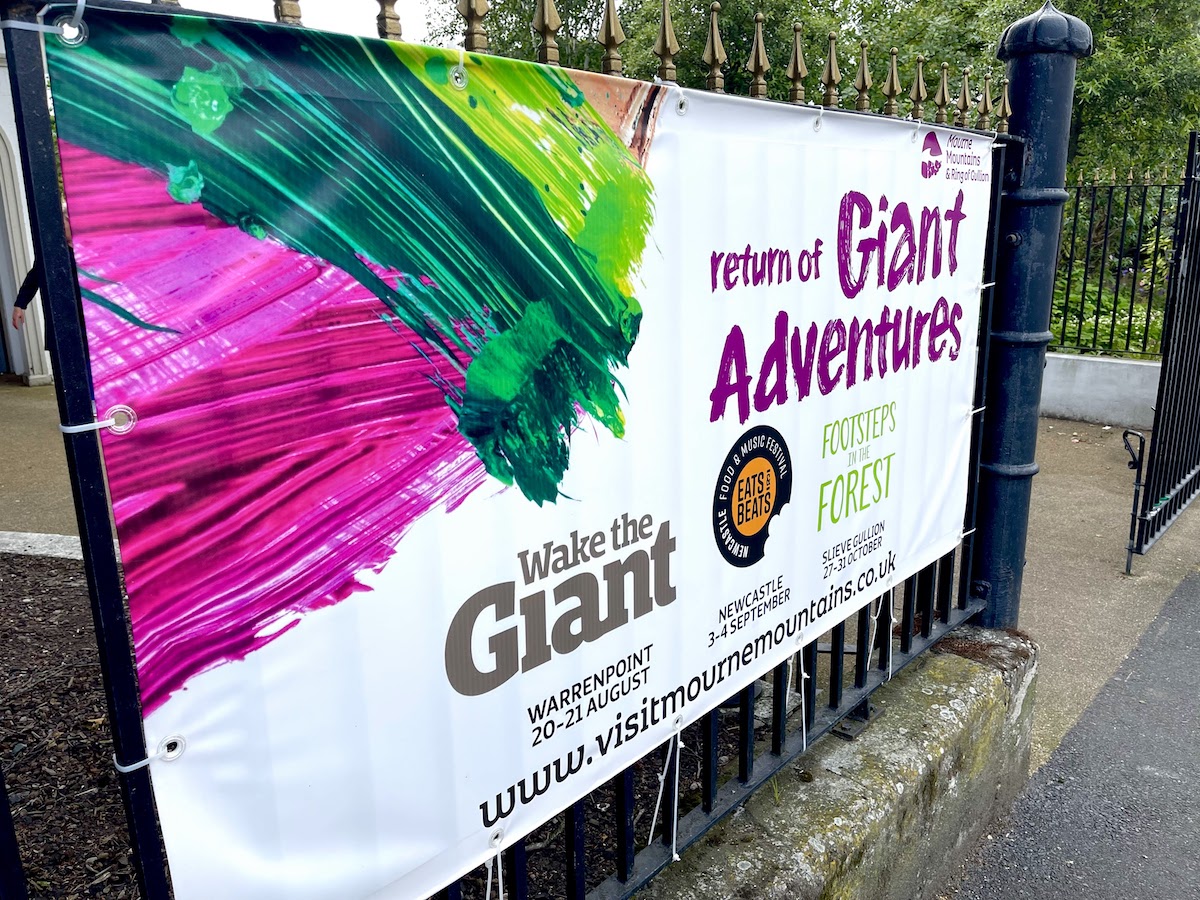 Warrenpoint will be be buzzing with excitement – myths, legends, music, food and family fun.

World famous artist, sculptor and Wake The Giant Creative Director, Francis Morgan, will conjure the Mournes and Cooley Magic to create a Giant in size, scale and wonder the likes of which has NEVER been seen before!

You do not want to miss this weekend in Warrenpoint – stick it in your diary now!

The Wake the Giant festival will start on Saturday 20 August at 2pm when local legend, The Point Man (Hugh Brown), will lead the return of Giant Fionn back into Warrenpoint with a jaw dropping procession.

The new 30 foot tall Fionn – one of the biggest Giants in the UK and Republic of Ireland – will roll into town and he has planned some giant surprises for everyone to enjoy.

You’d better be quick though, as Fionn won’t stay awake for long.

Catch him before he returns to his slumber to get forty winks before he reawakens that night. 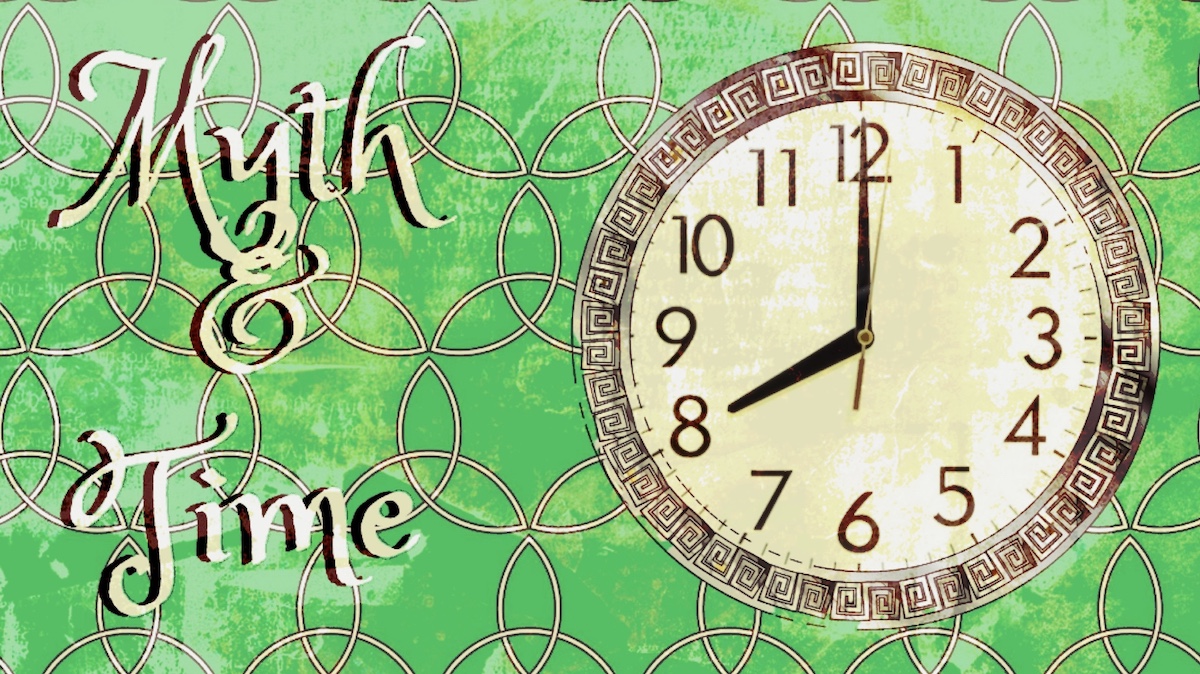 As the giant alarm clock strikes 8pm, Fionn awakens from his nap and makes his way to Queen Street for a street performance called ‘Myth & Time’.

Creative Director and Puppeteer Francis Morgan has created a beautiful story which sees Fionn regale us with his travels across the world and through time! 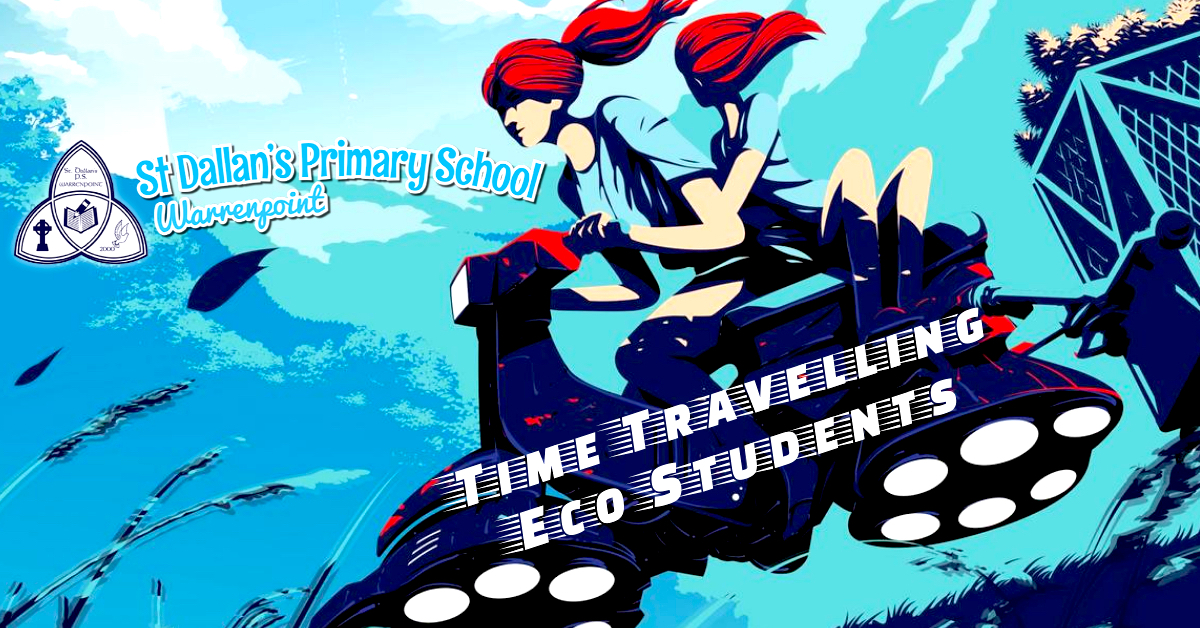 Take in the wonderful spectacle of the Myth & Time show, this 30-40 minute performance will be accompanied by local legend, The Point Man, and Fifteen Time Traveling Eco Students from the town’s local primary school, St Dallan’s.

But that’s not all, throughout the day there will be a giant food market, family activities and concerts in Warrenpoint Municipal Park.

Buskers will take to the streets to fill the town with music.

On Sunday, at the strike of 2pm Fionn will once again wake from his nap and make his way from Dock Street to Warrenpoint Pier as he another story he must tell us – the Story of Cahir Linn – the sunken city under Carlingford Lough. 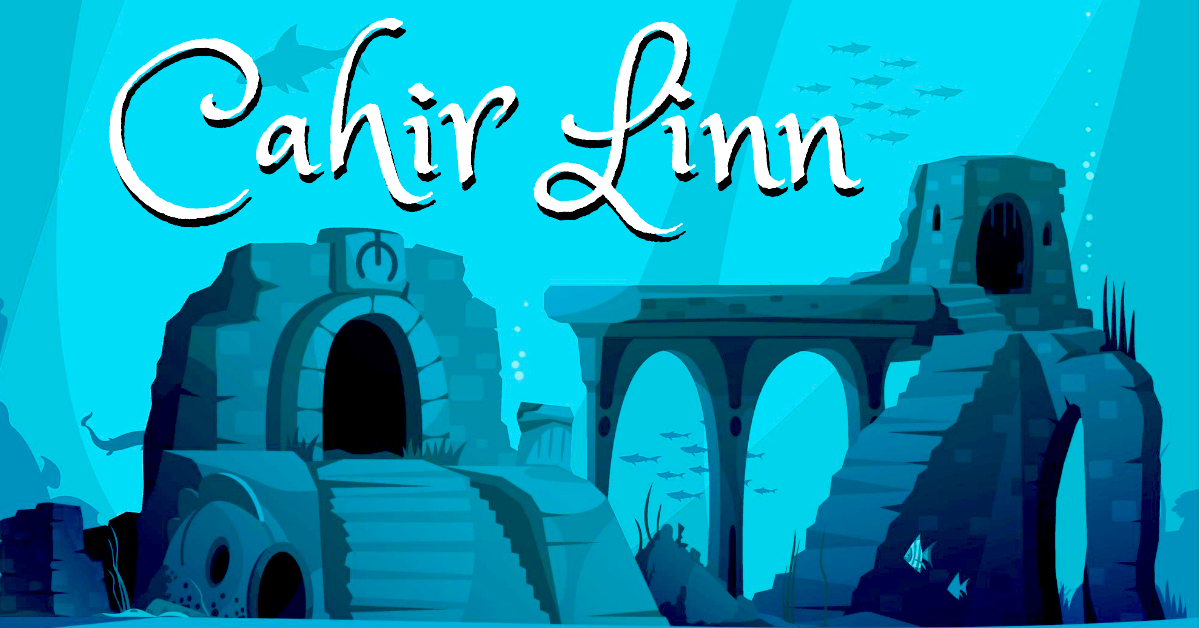 In ancient times, so the story goes, there was a city where Carlingford Lough is now – the beautiful Cahir Linn, city of the pool. Listen closely as Fionn tells us about the history and legacy of Cahir Linn and how it sunk and became Carlingford Lough.

At 3pm, Fionn makes his final goodbyes for this year and as he leaves Warrenpoint he reminds us of what lays ahead if we continue to cherish our environment.

The finale of the festival weekend will commence at 4pm in Clonallon Park for the planting of the Giant’s Forest with native Irish trees. 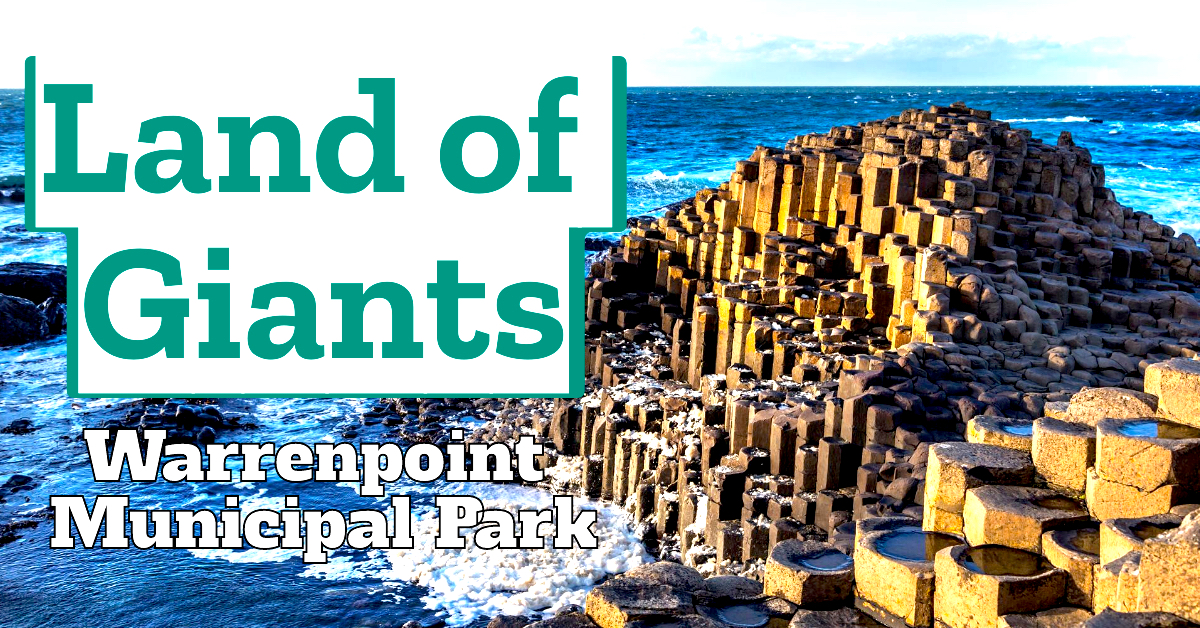 Warrenpoint’s Municipal Park will be magically transformed into The Land of Giants.

As part of the Wake the Giant Festival a host of Giant family activities will take place in the park.

Keep a Giant ear out too for some fantastic musical performances throughout the day.

Check back here for further details as we receive them! 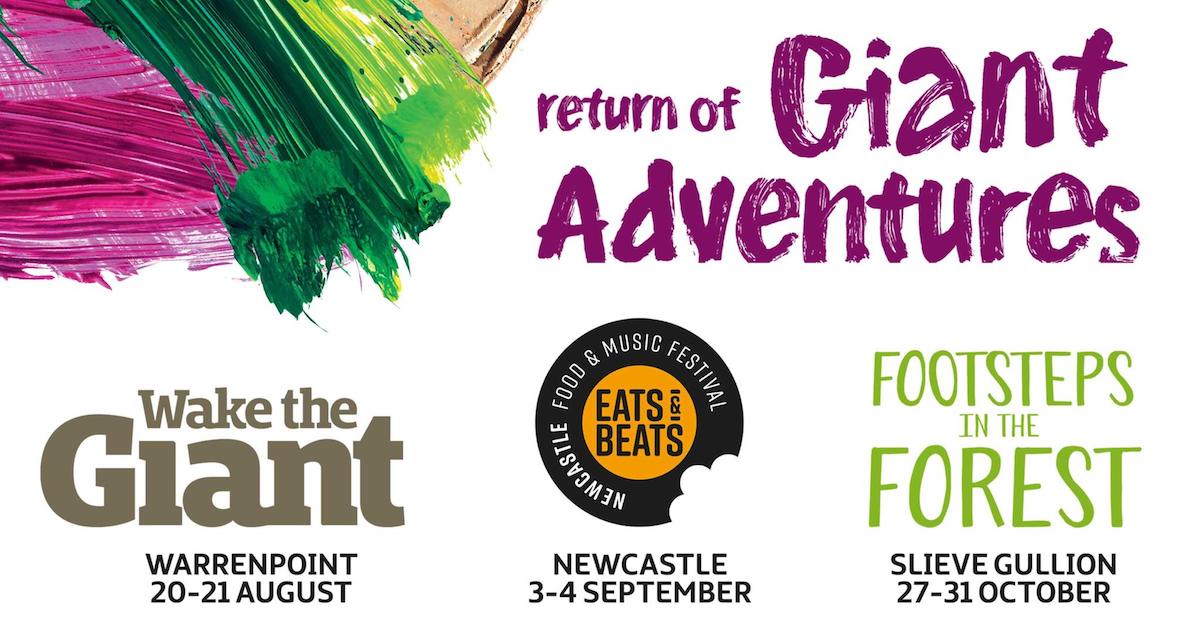 WAKE THE GIANT : IN PREVIOUS YEARS 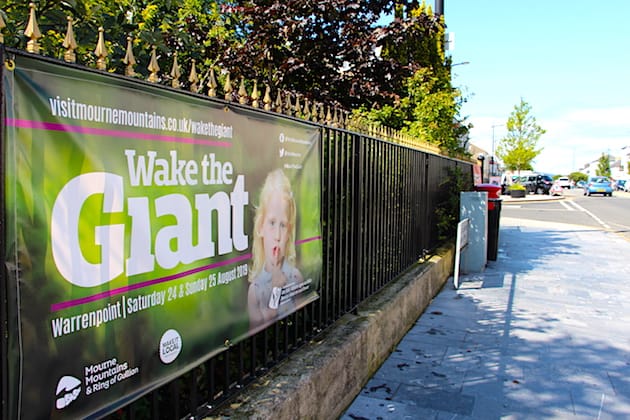 1000’s of people came to Warrenpoint for a weekend of magic and legends the last time the Wake the Giant Festival was held on 2019! Unfortunately, like everything in life Covid stopped the festival in Warrenpoint for 2 years ( we are delighted that it’s back for 2022!)

The magical moving theatre made it’s way through the centre of the town on the Saturday, 24 August 2019.

Check out the route Finn will took through the town.

Hundreds of people lined the streets to make as much noise as possible to try and wake the giant.

The Point Man stopped off along the route to get help from local businesses to Wake The Giant! 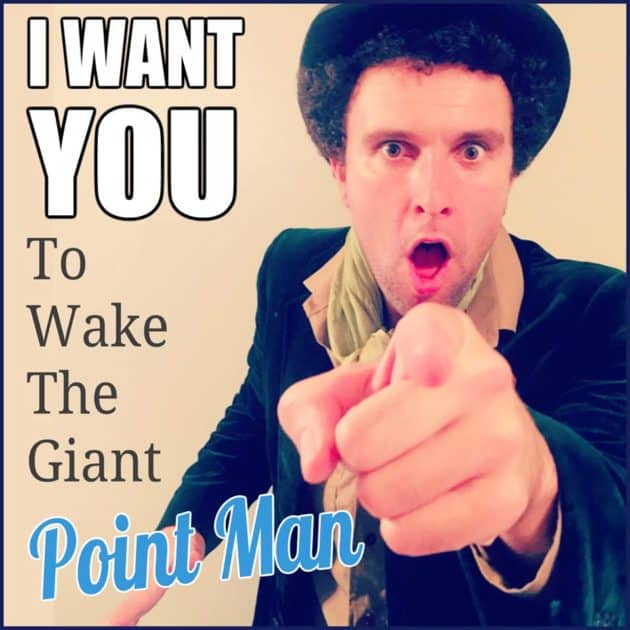 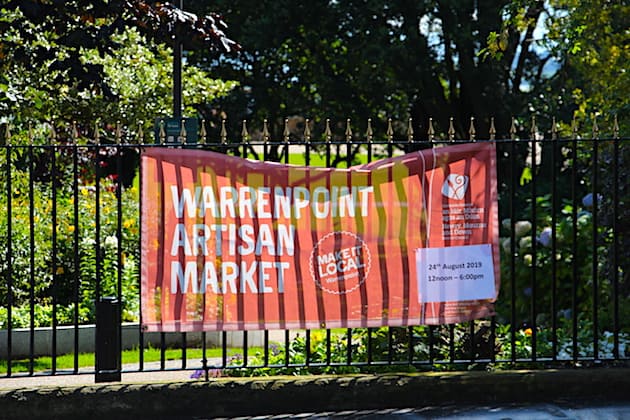 There was lots of food from local businesses available with live music during the afternoon From The Bandstand from various local artists. 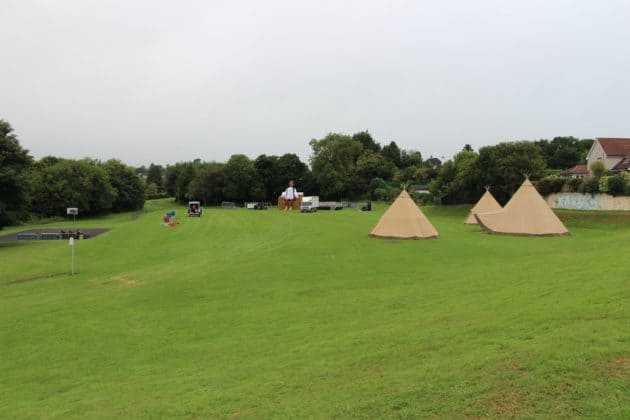 On Sunday, there were two theatrical performances to Wake the Giant at Clonallon Park, Warrenpoint

The story of Finn unfolds through live performances.

Have you still got a Mini Finn?

WATCH OUT… Mini Finn is on the loose!👀

Magical mini Finn’s, with secret powers wer handed out throughout the Wake The Giant festival in Warrenpoint in 2019.

Wake The Giant: The Production

What has Derry Girls, Game of Thrones, Give my Head Peace and Soft Border got in common with Wake The Giant? 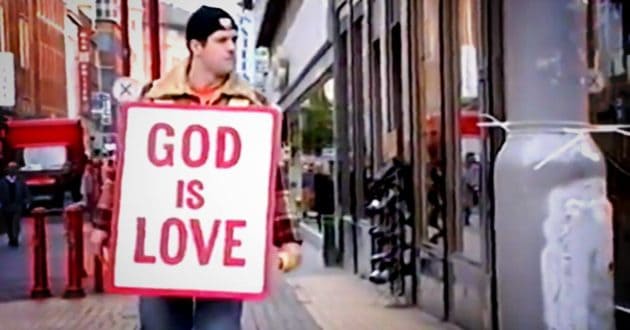 The voice of the Giant Ian McElhinney played Barristan Selmy in the worldwide smash Game of Thrones and Grandad in Derry Girls. 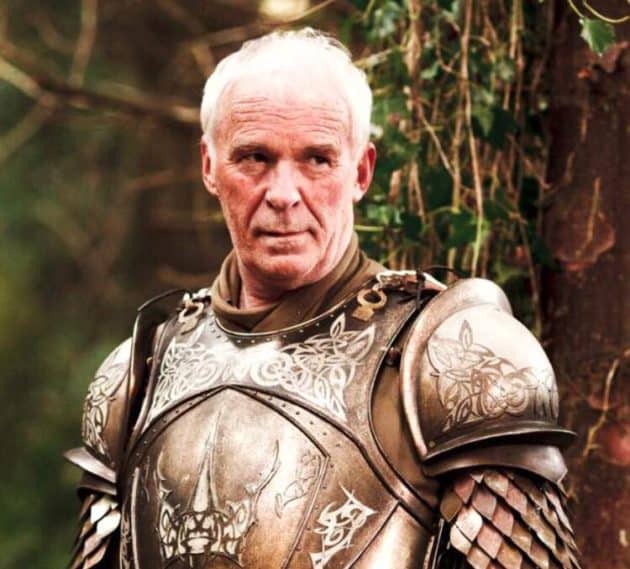 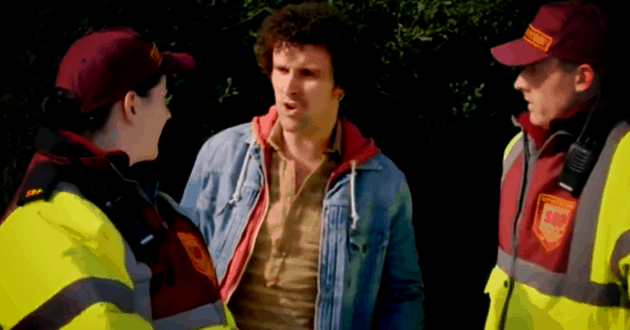 Renowned playwright and actor Dan Gordon has written a specially commissioned script to bring the story to life this year.

“Local legend has it that there is a giant sleeping in the Cooley Mountains on the far shore of Carlingford Lough, overlooking Warrenpoint.

This Festival is a brilliant way to keep local folklore alive by spinning the old yarns for a new generation.

The story sees the enormous Finn McCool sleeping (and we hear his snores roaring across the town!)

Finn’s mum, desperate to wake him, calls upon her grandson, Oisin, the greatest poet in Ireland, for help.

Together with his granny, Oisin must do battle with the mythical Hag Witch, Calliagh Berra, who, it is fabled, has come to steal away the youth of the children of Mourne.

This Festival calls for the whole population of the town of Warrenpoint to do whatever it takes to help Wake the Giant before the spell takes hold for ever!”

Wake the Giant: Bigger and Bettereeeee

We shot this video live from the procession through the town – you can see the tremendous fun everyone had!

It was so mush fun led by the hilarious Point Man (he’s mad but lovely!)

Can you see yourself in the video?

The video below shows Finn coming across Carlingford Lough on a ferry!

Finn is dozing again! But how did we wake him on 2018 – scroll below to watch the show!

We all know the story of Finn’s epic battle with the giant Ruscaire! (but just in case you need a reminder…)

The battle between the two giants raged across the Mournes, Cooleys and Carlingford Lough for days.

Finn lifted a huge stone and flung it at Ruscaire, it struck the evil Giant on the head and buried him into the ground!

The stone Finn threw, we now call Cloughmor and legend has it that The Big Stone is the final resting place of Ruscaire, The Giant of Snow and Ice!

Take a virtual walk to Cloughmor…