Warrenpoint – Things to know, do and see! 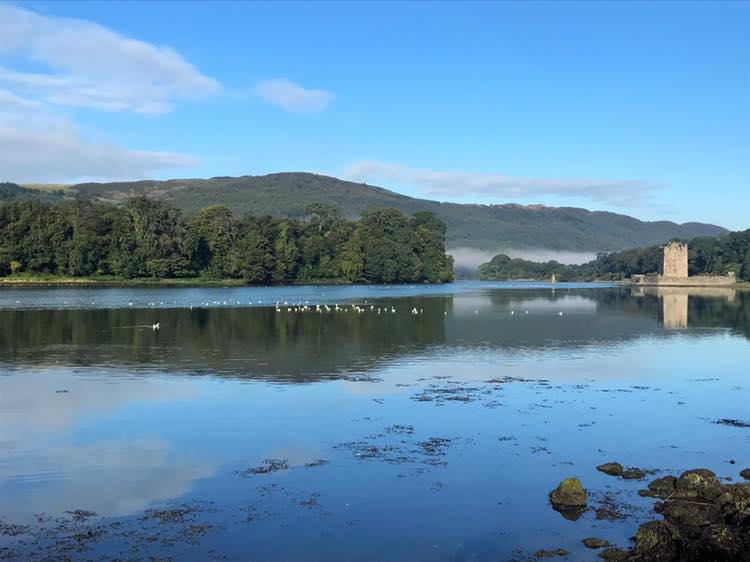 Warrenpoint is a small town located in County Down, Northern Ireland.

It is situated on the northern shores of Carlingford Lough.

Carlingford Lough draws both the Mountains of Mourne and The Cooley Peninsula down to the sea.

Warrenpoint is separated by a narrow straight of water from the Republic of Ireland.

Warrenpoint can be seen from the shores of Carlingford Lough from Omeath in County Louth in the Republic of Ireland.

Rinn Mhic Giolla Rua is the Irish for Macilroy’s Point of which the townland of Ringmackilroy originates from.

Warrenpoint is located in this townland. Local playing fields in the centre of the town have been named after the historic townland of Ringmackilroy.

The last UK census of 2011 listed a population in Warrenpoint and Burren of 8732 people.

The breakdown of the local Warrenpoint population by gender according to the 2011 census was 48.9% Female and 51.1 male.

The 2011 census recorded the religious breakdown of the population of Warrenpoint and Burren as follows:

The total amount of people born outside the UK and Ireland was 548.

The amount of lone person households in the Warrenpoint and Burren area was 3300.

The percentage of the Warrenpoint and Burren population that have no car or van per household was 20.6%

Narrow Water Castle from the air!

Warrenpoint things to do!

In the summer, a ferry operates across Carlingford Lough transporting passengers from Warrenpoint to Omeath in County Louth.

A walk along the promenade in Warrenpoint is stunning no matter what the time of year or weather conditions.

On a good summer day, you could mistaken for believing you are on the Mediterranean!

It just might be the perfect location for a Staycation in Ireland.

How about getting soaked by an incoming wave from Carlingford lough coming over the wall?

The video below shows an angry storm in January 2014.

International Guinness Blues on The Bay Festival in Warrenpoint – Spring Bank Holiday Weekend Warrenpoint, County Down at the end of May every year.

Check out the video of the BBC Ralph Mclean Show broadcasting live from the Blues on The Bay Warrenpoint.

The Maiden of Mourne celebrated it’s final year in 2019.

Wake the Giant is a superb summer festival in Warrenpoint for all the family.

We celebrate the mythical Finn McCool – Northern Ireland’s famous giant (He built the Giant’s Causeway and threw the Cloughmor to kill the evill giant).

1000’s of people from all over have come  to Warrenpoint to Wake The Giant!

The festival usually takes place at the end of August! 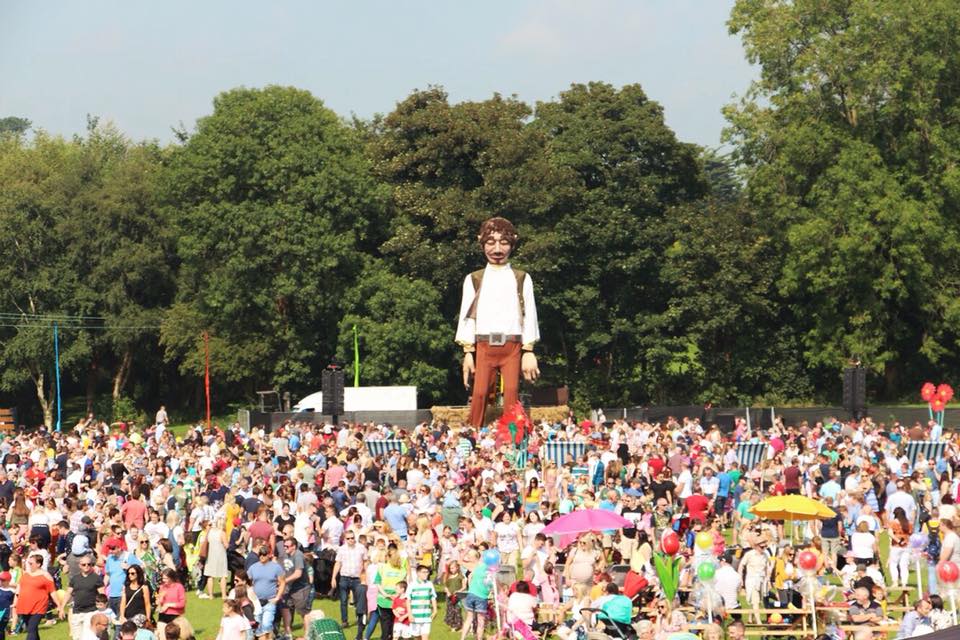 The name Warrenpoint originates from a family who lived in the area by the name Waring.

This information was recorded by Father Bernard Trainor who kept records of the people living in the area.

According to local folklore, the area was a rabbit warren – the rabbit is featured on the crest of Warrenpoint Town Football Club, and thus how Warrenpoint got it’s name.

In May 1849 , the railway connection opened in Warrenpoint bringing tourists to the seaside at Warrenpoint.

Thousands of people flocked to Warrenpoint with many taking a trip across Carlingford Lough from Warrenpoint to Omeath.

The railway line closed in Warrenpoint in 1965.

Warrenpoint and The Second World War 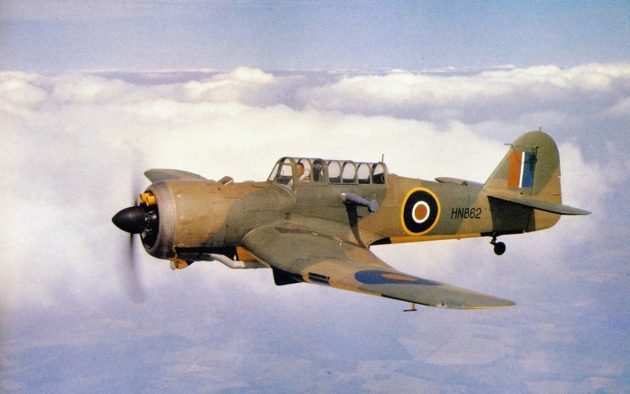 In July of 1945, two RAF planes collided while taking part in a demonstration. All of the airmen were killed in the collision.

Debris of the plane fell on the main streets in Warrenpoint.

Details of the crash – planes and crew.

Oxford I – LX598 of 290 Sqn Long Kesh/Co.Down collided during a Civil Defence Demonstration with Martinet TT.1 – MS626 due to bad weather conditions (mist).

The Battle of Normandy was taking place in France at time this air accident occurred in Warrenpoint.

Every part of Ireland / Northern Ireland has a tragic story related to the conflict and troubled times in Ireland.

Warrenpoint and County Down is no different!

We list some of those below purely to document our town’s history even in sad times!

The War of Independence

Two RIC officers were killed in Warrenpoint in February 1921 during the War of Independence.

This is the account of the incident given by Peadar Barry, an IRA officer.

It was customary for the police in Warrenpoint to go out each night on a patrol of the town. The movements of the patrol had been watched for some time previous to our going in to carry out the ambush. We found by careful observation that the police had no settled routine route for their patrol. They changed their routes through the town almost each night. This fact forced us on the night planned for the operation to post men at various points to ensure that no matter what particular streets they traversed some of us would have an opportunity at some point to engage them.

One particular fact we knew from observation was that every night they traversed a street known as Summerhill which had three cross streets leading off. Parties of our men were placed at two of these intersections in such position as to ensure that the police would come under fire if they traversed Summerhill area.

I was not myse1f a member of either ambushing patties on this night. My orders were to scout and to ensure that the ambushers would get timely warning of the approach of the police. As far as I can remember a patrol of five men came along into the Summerhill area and were attacked by bomb and revolver fire. Some of the attackers had rifles. I cannot say at the moment if the rifles were used or not.

In the exchange of fire the police suffered the following casualties: One policeman killed, two wounded, one of whom subsequently died. Intensive police activities followed this ambush in Corrogs area. All the houses were raided by police, Special Constabulary and Auxiliaries.

On the morning after the ambush I was taking a horse and cart up the road to a neighbouring house when I met two lorryloads of Specials. On one of the lorries I recognised an R.I.C. man named Constable Michael Enright. Much to my surprise I found that the lorries passed me without interfering with me and proceeded to my father’s house. There they found a picture of Terence MacSwiney which they destroyed.

They then arrested my father and took him into Newry, a prisoner. I found out quite recently from a friend who met this ex-Constable Enright in Newry about a year ago that Enright told him that he recognised me that morning and that if he had identified me his comrades would have shot me. My father, after his release from Newry, told me that this same Constable Enright had saved his life after his arrest when other policemen wanted to shoot him. Enright resigned from the Police Force shortly after these incidents.”

Warrenpoint and The Troubles

In April 1976, loyalist paramilitaries attacked the Ulster Bar, The Square, Warrenpoint throwing a bomb into the pub.

The explosion killed Matthew Campbell who died as a result of his injuries.

In June 1976, Warrenpoint teacher Liam Prince was mistakenly shot dead by the British Army close to the border.

In 1981, Ivan Toombs, customs officer and Major in the Ulster Defence Regiment (UDR) was shot dead by IRA gunmen in the Custom and Excise offices based in Warrenpoint Docks.

In 1983, The Crown Hotel which was situated on The Square in Warrenpoint was blown up by the IRA.

The Seven Steps along the front shore was also firebombed.

In February 1983, RUC reserve constable Edward Magill was shot dead by the IRA while on duty in Warrenpoint Town centre while walking to the shop.

The police station was the intended target of the bomb attack. 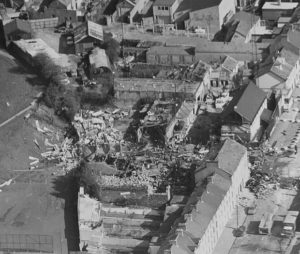 Where to stay in Warrenpoint? 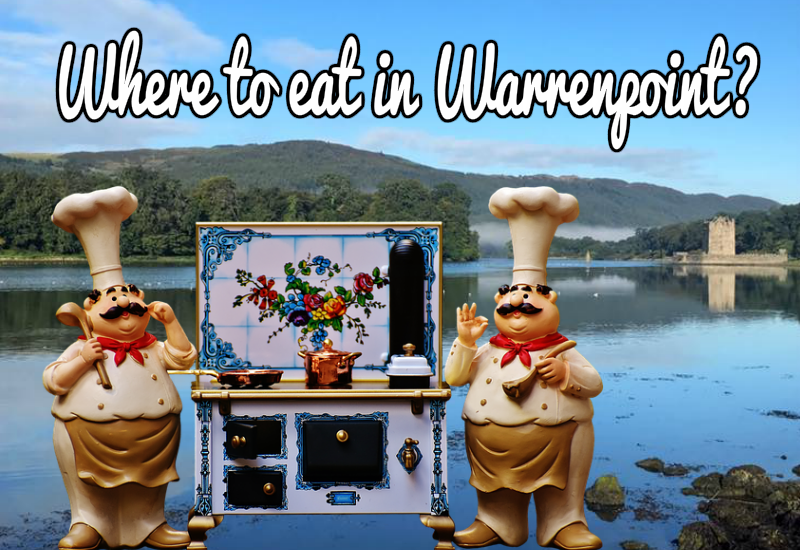 Fastest Round of Golf attempt in 1986